Last night I read Ruby “In the Night Kitchen” by Maurice Sendak. This classic is one of my favorite books to read her, because it’s wonderfully illustrated, amusing to both of us and not irritating to me, and because I think the large font and frequent repetition of key words are good for developing her reading skills. But we haven’t read it in a while.

Ruby calls the book “Kitchen,” and since recently she’s been watching cooking videos and getting busy working in the kitchen with me, I suggested we read “Kitchen” while she took a bath and she happily agreed.

When I turned to the page where the bakers celebrate the finished cake, after Mickey has helped them out by flying his bread-dough airplane over the top of the Milky Way and diving into a giant bottle of milk in order to pour some milk into their cake batter, Ruby pointed to the baker on the right and said, “Car!” 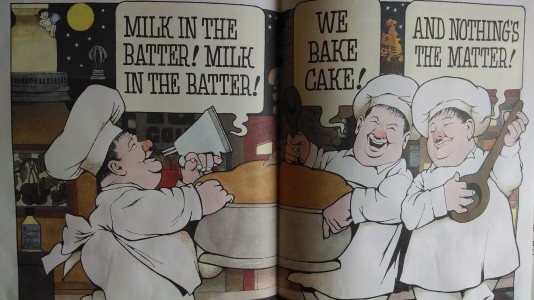 In my privileged position as Ruby’s mother, I both know that she has severe apraxia AND that she knows full well what a guitar is, loves to watch and hear it played and to join in on the fun, is getting better at strumming the strings rather than smacking them, and that when she tries to say “guitar,” she loses the small “gui” altogether and substitutes the “t” with a “c.” If I face her and direct her attention to my mouth and slowly repeat the word “gui-tar” and ask her to try it, she’ll get the “gui” but not the “t,” and she’ll only try a couple times before she gets frustrated and wants to break away and pay attention to what she was in the middle of before I reminded her that she can’t speak well.

Ruby’s pointing to this picture and saying “guitar” shows that she recognizes, because of the baker’s hands and the way he is holding the spoon, that he is playing air-guitar with a wooden spoon. Recognizing air-guitar with a wooden spoon shows that she grasps pretend play and isn’t absolutely literal-minded. Maybe it also shows that she understood the musical vibe of this whole illustration, despite the fact that the narrative didn’t say the bakers were singing. It doesn’t surprise me at all that Ruby recognizes these things, or that she eagerly points them out to me. But imagining what someone who was ignorant of Ruby’s apraxia, and who couldn’t put her very limited speech in the context of her lively behavior would make of her exclaiming “Car!” at this illustration scares me. Not only would that indicate no understanding of the picture, it would probably suggest that she doesn’t know what a car is either. They’d likely either ignore her comment, or, worse, tell her she was wrong, that there’s no car here, making the interaction a confusing failure whether she realized that she’d been misunderstood or not.

Is this a dramatic reaction to Ruby’s comment on the Sendak book, or to the things that can go wrong? I don’t think so. A six-year-old who can’t control her mouth well enough to get a two-syllable word out is very rare, it’s not a familiar sight. I see people misunderstand Ruby, and simply not realize that she’s trying to say something meaningful and appropriate, all the time. I see it among strangers, and I even see it among people who know Ruby and know that she has apraxia. I even see it at speech therapy. Although Ruby’s speech has improved and developed really wonderfully lately, most of her words are actually “word approximations,” and it takes a lot of context and hearing her say things often to realize what it is that she’s saying. I’m a decent translator, but I’m not always there.

The second-ever Apraxia Awareness Day is coming up, on May 14th. I think that a lot of the awareness effort is directed outwards, to tell people who aren’t aware of it what apraxia is, and that’s wonderful and important. But I also want it to be about our own awareness, our mindfulness of how deeply apraxia affects the children that we do know have apraxia, and how hard they are working to communicate, all the time.