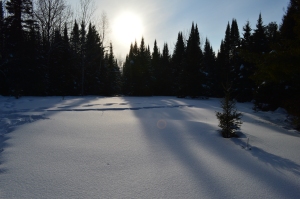 We took a trip to the North Woods of Wisconsin to visit Andrew’s father and stepmother. Having heard about their massive snowfalls and extreme cold, while losing patience with winter here in New York, I’d been slightly skeptical about traveling to Northern Wisconsin for vacation in the middle of February. But their snow was crisp and clean, the house was warm and cozy, the weather and the landscape were absolutely gorgeous, and the company was wonderful. I stayed far away from my phone and computer, I ate delicious food cooked by somebody else, and I got to spend more than a meal’s-worth of time with this half of my in-laws for the first time. I took part in some choice Winter Wonderland activities. And I came home to a weekend of 50 degree weather (I’ll pretend I didn’t just see the headline “Get Ready: Bitter Cold to Return in Big Way” on weather.com).

Andrew is excited about something….is it the Avalanche? This is a tool that we used to pull snow down off of the roof to make way for another big snowfall, which arrived on the last day of our stay. Fun and satisfying for everyone involved.

We were well past snow-angel depth, but I couldn’t resist the urge to fall back into the snow. I was rewarded with a cool hug of weightlessness. Of course there was some sledding.

We went snowshoeing. I convinced Andrew to try the anti-gravity snow embrace. 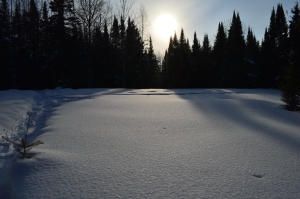 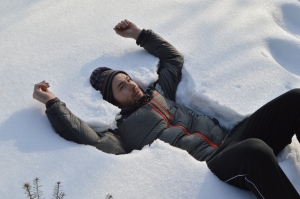 We had plans to go ice fishing with Dale and Pat’s friend, and we did, but the night before we fished he presented us with twelve and a half cleaned, filleted crappies — that is, “crawpies,” which are the fish found in the local waters — so we feasted in advance. 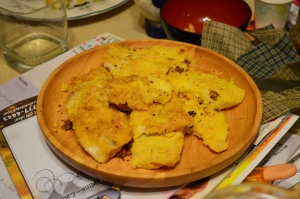 And Marty took us on our much anticipated ice fishing trip. We walked out on the lake and he showed us how to drill holes with a manual drill, and an electric drill. He drilled several holes and then took out a piece of high tech gear known as a Fish Finder, I think, which drops into the hole close to your fishing pole and uses sonar to identify fish nearby, so that you can move your hook closer to the fish, or wiggle it in the hopes of enticing the fish. So the experience of fishing was one of alternately being mesmerized by a screen, as usual, and then remembering I was on the middle of a frozen lake and glancing around. 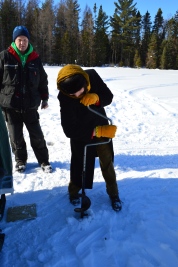 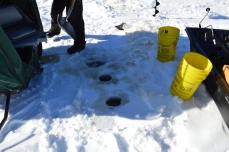 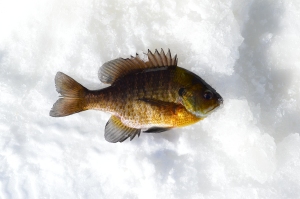 I caught three fish. Andrew caught five. Marty said they started biting as soon as Andrew and I left. We rode the snowmobile back to the house! 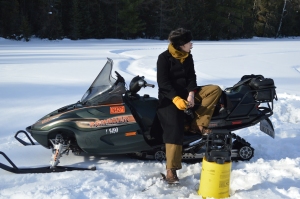 We also saw the Lego Movie, which was awesome and had Ruby dancing and driving in her seat. And the night before we left, Ruby had an early birthday celebration. Thank you Pat and Dale for such a lovely trip!