I haven’t made a lot of bread because I lack patience and because I don’t usually make things where measuring and following recipes precisely is actually important, but I would love to become a competent bread baker. This recipe is so easy that it doesn’t even make me feel like I am practicing baking bread when I make it, but it creates an utterly edible loaf. It comes from James Beard‘s book Beard on Bread, which my mother gave me several years ago, and is the first recipe I’ve tried from the book, after leafing through it longingly many times.

Put the flour in a large bowl and place it in a warm oven. (The book said a gas oven with the pilot light on would be warm enough, but mine didn’t feel warm at all, so I turned it on to 200 with my ceramic bowl inside.) Both the flour and the bowl should be warm when you make the bread.

Dissolve the yeast in half a cup of the warm water, and blend in the molasses. Let the yeast proof: this means giving it a few minutes to prove itself alive and well by starting to get bubbly in its water and molasses.

Then add another half cup of water. Now combine the flour, the yeast/molasses/water mixture, and the salt. Add about 1 more cup of warm water, enough to make the dough sticky and wet, and spread it into a buttered 9 x 5 x 3 inch bread loaf tin. Cover with a dishtowel, set it in a warm spot (i.e. on top of the oven) and allow it to rise by one-third of its original size. 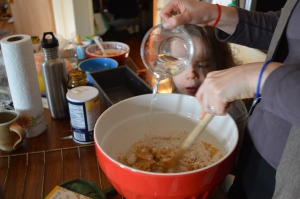 This happens quickly — I left it alone for about an hour and found it had at least doubled.  The bread was still good. Do not drown in Facebook or worry about the fact that your car is falling to pieces during this time. That will ruin the bread. Just do this:

Preheat the oven and bake at 450 degrees for about 50 minutes, or until the top is browned and the loaf sounds hollow when you tap it. Remove it from the pan and return it to the oven for 20 more minutes to crisp the crust. Make it, it’s good!